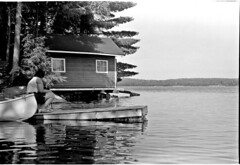 This past weekend was the 6th cottage weekend. It was the smallest grouping of people since I started having these cottage weekends. Nine people in total, but it was really nice. Everyone had the time to chat, hang out and actually have discussion. In previous years there were a lot of people, so many at times that I realized at the end of the weekend there were people I said less than a sentence too.

We spent a large amount of the weekend cooking and eating. We were also introduced to the Catan games, specifically the Settlers of Catan and the Starfarers of Catan. Many games were played and many hours were wasted.

The weather was beautiful. Warm during the day, colder at night.

The picture above was taken by me using our big Crown Graphic camera. I’m not much of a photographer, so the pictures for it aren’t great (there are three more located on my flickr account here, if you’d like to look at them.