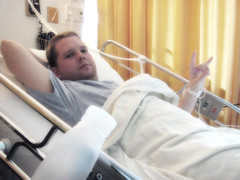 This is Firda posting. Just wanted to let Blue Goo readers know that Troy had an appendix surgery last night after midnight. His appendix ruptured which left all sorts of nasty stuff around the area. The surgery that was supposed to last only an hour lasted two hours because the O.R. team had to clean up his guts. His condition is currently stable and he’s been drinking ice water and ginger ale. No food yet, though. Hopefully he’ll be released from the hospital in a couple of days. Wish him well!