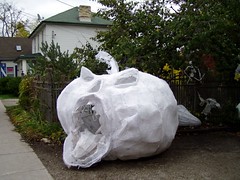 A meme for Halloweenie. This meme was pilfered from Dave at Blogography.
1. Do you prefer “trick” or “treat”? Please explain.
I’ve always been a sucker for candy, though I also enjoy a good practical joke (as long as someone isn’t irreversibly harmed in the process).
2. What year did you quit trick or treating?
Search me. I can’t recall. Probably 12 or 13. I know a lot of people stop before that age but I had a younger brother.
3. What was your favorite costume? Did you make or buy it? How much did you spend on it (money or time)?
My favorite costume was when I went out as a hospital patient. I had a cast on my leg, a wheelchair, a patient gown, head dressing etc. And to make this costume it cost me the use of my leg (the load bearing aspects) for a couple of months, since the cast wasn’t just a prop but a healing tool. The short version of the story is I jumped off the top of a hill, did the splits, broke my leg and was in a cast for two months or so. This happened when I was 7ish.
4. What are/were your five most favorite things to receive when trick or treating?
Full size chocolate bars, caramels, pop (or soda or carbonated sugar drink), red suckers, red licorice.
5. What are/were your five least favorite things to receive when trick or treating?
Green or black candies (usually jubjubees), black licorice, there are these horrible Halloween candies wrapped in orange and black paper which I have no idea what they are called but they suck, anything butterscotch flavoured (I don’t really enjoy butterscotch), those snack-packs of chips (with like 5 chips per bag), especially when they are regular or ketchup flavoured.
6. Have you ever been chased by cops or unruly mobs of costumed children on Halloween?
Nope. Never. I’m a good kid. Plus we live out in the middle of the
country.
7. What’s the worst thing you’ve ever done on Halloween?
I went to a costume party with some housemates. I was dressed as a paramedic with forceps, stethoscope and syringes (minus the needles). I started doing shots of tequila with the syringes, usually while spouting such gems as “100 cc’s stat!”. Needless to say I got quite intoxicated and ended up in the back yard attempting not to throw up. I found that listening to my heart with the stethoscope was pretty effective, though in the end the urge to puke won. I could barely walk home. Thankfully my housemates helped me get home.
8. What is your biggest Halloween disappointment?
Not sure. When I was younger I’m sure I was disappointed at least once in the amount of candy I recieved. Not enough. Though when is any amount of candy enough (unless you’ve eaten too much and feel sick to your stomach.